You are required to login to view this page.

East Suffolk Wakeboard and Water Ski Club have been affiliated to British Water Ski for many years but is it time to break the connection?

This question has been asked several times before and we have always remained affiliated. I am not sure if circumstances are different now or if it is just time to ask the question again.

What’s been done so far?

In the Summer, we were visited by the chief executive of BWS, Patrick Donovan. The purpose of the visit was to discover whether BWS could offer us anything to make our affiliation more viable. We had a very interesting discussion and showed Patrick the launch slipway, the jetty, where we ski and our general setup so that he could get an overall picture of how we operate. He was able to see the severe limitations we face compared to lake skiing clubs with premises,  commercial interests and all round good water. Despite a good, frank discussion, he was unable to suggest ways to give us more benefit from our affiliation.

What is the current deal?

The terms of our affiliation state that we must join every one of our members to BWS and we must pay an affiliation fee of around £550. This totals about  £1500 that we pay BWS, depending upon the number of members. In return for this, each of our members receives BWS membership and where relevant, their SBD2 is validated (SBD2 qualifications require BWS membership to be valid). As a club, we receive liability insurance to cover the club and committee for all the usual issues like being sued for negligence. As we are a SBDA centre, we can also test our own drivers and issue SBD2 and International certificates of competence (ICC).

What happens if we leave?

If we leave BWS, then we will need to buy our own insurance to cover liabilities and we will have to decide how as a club we regulate safety and boat driving. Without this, we will be in a very vulnerable position if anything bad happens whilst the club is operating. Generally speaking, insurance policies these days require a lot of paperwork to back up club safety issues, risk assessments, vulnerable people procedures and many other eventualities, so there is a fair bit of work for us to do to get us into a satisfactory legal position. With the end of BWS year being March, we have a lot of work to do before March if we exit after this season.

We have researched insurance policies and it seems that we could get cover for around £600 as long as the paperwork is in place.

If we no longer have the protection of SBD2 qualifications, we would need to replace it with something like RYA level 2 powerboat or possibly develop our own method of testing drivers. We could of course carry on testing to the same methods as BWS, but we would not be able to offer ICC or SBD2 after the testing.

Please let us know your thoughts.

Your club committee have realised that the rules regarding use of the facilities are not clear, partly because there seem to be grey areas and inconsistency. We have started to tighten up where we can for the good of the members and to clarify what we expect. This is the reason for some messages on the Whatsapp group recently as well as several messages directly to people. We hope that everyone will support us in this drive and will understand the reasons. If this is a bit long, please just read the highlighted bits which are the important bits. The rest gives the reasoning and further explanation.

Who can use the Facilities?

If you use the jetty for anything to do with skiing, then you need to be a member. This means:

The jetty, mooring fees, signs etc cost money to maintain, and if you do not become a member, then others are paying your proportion for you.
Currently we are affiliated to BWS and our terms of affiliation mean that all of our skiing members have to be members of BWS. That is why most of your membership money goes to BWS. BWS membership runs from March, so if you do not pay us until August, then you are wasting 5 months of insurance cover as well as putting committee members in a vulnerable position if you use the club facilities.

The only exception to the above, is when we introduce new people to the club. If someone wants to join the club, we allow them 5 visits to try it out. Those wishing to do this are welcome on Wednesday evenings by prior arrangement and payment of £25. This is not open to anyone who has previously been a member or has already visited 5 times.

All boats operating at the club must be registered with the club and must have a Ski Boat Driver level 2 (SBD2) holder on board and in charge (not necessarily driving, but able to give instruction and take control).
Anyone registering a boat with the club and receiving a boat number *must hold a SBD2 and hold at least £1,000,000 insurance for the boat.
For the purposes of this, ‘operating at the club’ means pulling a skier from or to the jetty or *tying to the club jetty.  Simply put, any situation in which authorities considered that the club was allowing or facilitating that boat to operate.

*The rules surrounding which boats are registered have been poorly explained and somewhat vague in the past, so this year, some people have registered boats yet do not have SBD2. We as a committee have decided to allow these to continue for this year but for next and subsequent years, SBD2 will be a requirement of registering a boat and only registered boats will be allowed to tie to the jetty regardless of whether used for skiing. We hope that the period of grace will allow people to sort the necessary SBD2. A course will be arranged.

Boats driving with skiers or boarders must take an observer on board. The only exception to this according to BWS is when the boat is the only one operating at the time. This is particularly poignant as this was discussed on the jetty on Sunday before George drove for a boarder with no observer. Although the rules said he didn’t need to, his boarder suffered a nasty head injury requiring hospital attention. Luckily the boarder was conscious and able to re-board the boat. Had that not been the case, the situation could have been far worse, so please can we tighten up on this?

Registered boats are also entitled to use the Felixstowe Ferry launch slipway.

There are many people affected by this including me. I have been poor in joining on time, people have not insured their boats and some still have not paid membership. Please support us in tightening up all these points.

Some members of ESWSC took to the cold waters of the Deben on New Year’s Day to get that first ski of the year:

On 10th June we were notified that the newly installed jetty ( not yet finished installing) was no longer attached to the beach. It was a windy afternoon and nobody really wanted to go to have a look,but good ol’ Matt Moore took Lewis’ RIB and braved the elements. On inspection, it seems that three of the hinge pins had been removed. Thankfully, this meant that the jetty was still moored and no further damage had been done. All sections were still attached to the ground.

Later that day, we had notification that the jetty had been covered in thick mud and the sign completely smothered with the words ‘F*** You’ written into the mud. Someone clearly with a grudge against us rather than just someone trying to cause a nuisance.

The problem here is that if the jetty was to go adrift, it could do a lot of damage, for which we would be liable. The mud smeared on the sign means that our legal obligation to have a reflective sign is in jeopardy and Trinity House, who look after safe navigation channels will be looking into our obligations. In essence, we have obligations and must take this seriously.

To that end, I have spoke to the police who have passed the case to their investigations department and will report the matter to Trinity House on Monday. Anyone with information should call 101 and report to the police using reference number SC-11062017-121.  There will also hopefully be an article in the East Anglian Daily Times and other publications appealing for information.

Please spread the word that we are after information.

The club is really thriving this year thanks to the hard work and dedication of its committee. As well as the usual tangible work like membership management locally and with British Water Ski, there is an air of belonging and ownership throughout. Thank you all for helping this to spread.

Wednesday evenings have seen more people learn and enjoy skiing and wakeboarding. Thanks to Jake Moore and George Algar for teaching wakeboarding and thanks to Kate Kydd for helping me teach skiing. Thanks to everyone for making our newcomers feel so welcome and for your encouragement.

The new sense of club ownership mentioned above and the influx of new learners have led to an increase in membership. Unlike many years, all of the users of the facilities are club members or are paying the Wednesday night rate. Thank you to everyone for making this happen.

Most people will be aware of the beautiful sign on the jetty informing people that they need to join the club if they want to use the facilities. Many may not have noticed the new sign at the top of the slipway telling people about paying to launch boats. This has been commissioned to help Stevie Read’s task of collecting money for us. This is a long awaited and much needed arrangement to help us collect money for the jetty.

Each registered boat should now display a boat number to show that it is insured and that the registered owner has passed the SBDA requirement for driving at the club. If you have a boat registered and have not had your number, please contact Richard Klein at membership@eswsc.co.uk to arrange getting your stickers.

Very nearly all of the drivers at the club have passed the Ski Boat Driver Award which, although a rule of the club has been very difficult to enforce. There are just one or two people who need to to complete it and their training and test is booked. By the end of August 2016, we should have 100% compliance. This has been a goal for a long time so thanks for supporting the initiative. People without SBDA can drive boats as long as they have an SBDA holder in the boat and ‘in charge’.

You will probably know that ESWSC used to ski every New Year’s Day to raise money for the RNLI. Whilst looking through some old files, I came across this…
Some names you may remember…
Who were the skiers? I think I was one of them and Hugo was there too with some ‘Single ski action’! 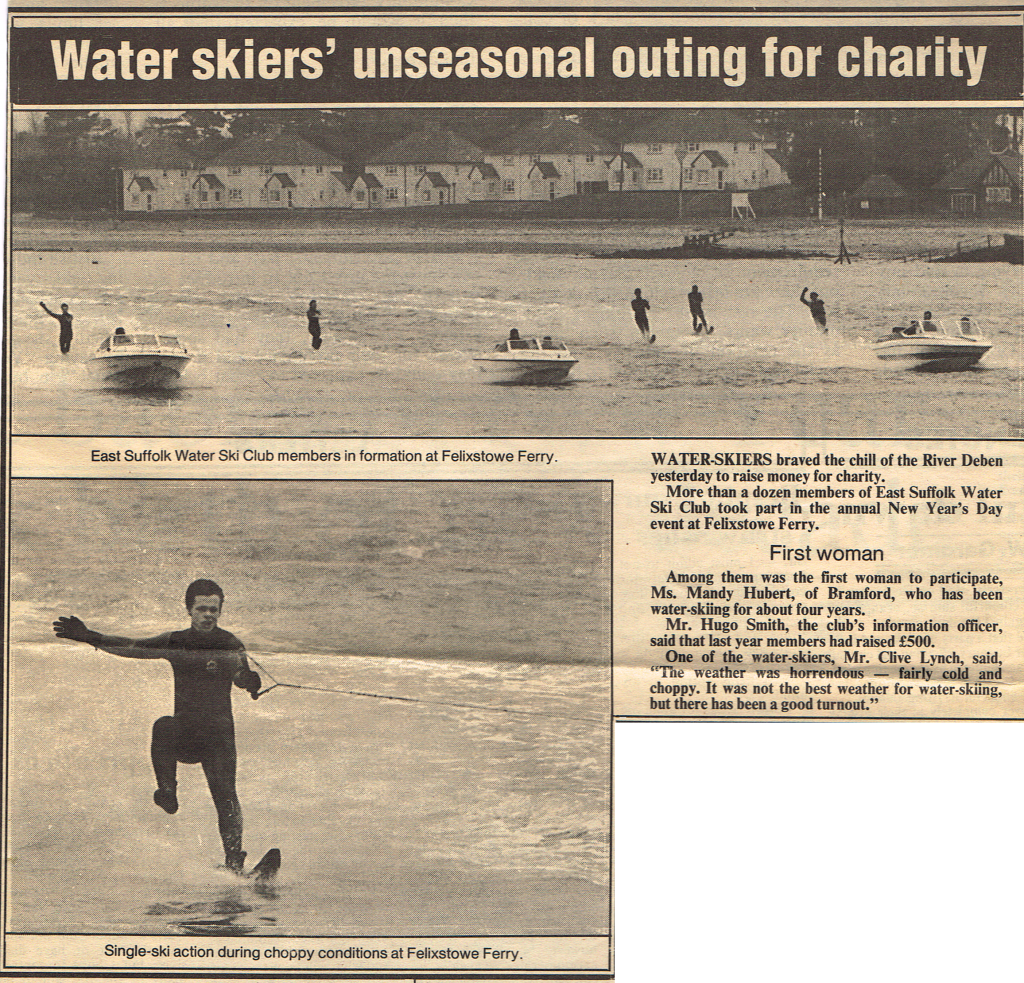 Now these are probably from a different year, but you can see what we used to get up to and you can see that the RNLI used to turn up too 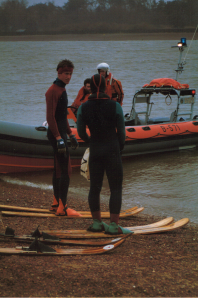 This banner was certainly a different year because I remember that this picture also made the paper. 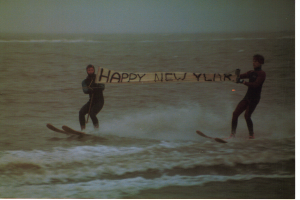